Home / World / Where is Fan Bingbing? 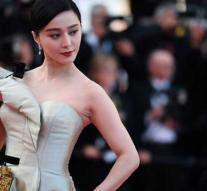 shanghai - There is probably no Chinese who does not know the face of the actress Fan Bingbing. Where the Americans have actresses like Sarah Lawrence or Anne Hathaway, the Chinese have Fan.

She is one of China's best paid artists. Fans face is on the cover of many magazines, she advertises mobile phones, fashion and cosmetics and was often found on social media. Until this summer. And now it is rumored by the rumors that famous actress has aroused the wrath of the president, Xi Jinping. Who would find that she has a bad influence on Chinese morality.

When after the long summer months the world started turning again, the Chinese suddenly discovered that Fan Bingbing had disappeared from the face of the earth. Her latest message on Weibo- the Chinese Twitter where 62 million people follow her- dates from 2 June and was about the charity she is committed to: children with congenital heart defects. Then she found a number of other messages 'nice!' And on 1 July she visited a children's hospital. Then it remained silent.

The disappearance could have something to do with the accusation made by television presenter Cui Yongyuan in May. He made two contracts public that were about Fans role in the film Cell Phone 2. Not only did the actress have quite a few notes on her vocals, the two contracts each had a different value. One official and the other so black.

According to Cui, the actress gave the one contract with a pay of 10 million yuan (1.24 million euro) to the Chinese tax office, while the other contract of 50 million yuan (6.24 million) was paid under the table. Fan is not the only one, many more actors would work with 'yin-yang contracts', was Cui's claim.

Later he withdrew his accusation, but then it was already too late. The tax authorities announced an investigation into yin-yang contracts. The management denied that Fan concluded such contracts, but promised all cooperation.

This week photos surfaced of allegedly the cleared office of Fans management. Unconfirmed, later retrieved messages on the internet from Chinese media claimed that her employees are questioned by the police.

Those who 'disappear' in China usually have the wrath of the Party on their neck. That suspicion also happens with Fan. The Party announced just before the summer that it must be finished with the 'worship of money' by Chinese celebrities. They give the youth the wrong example.

President Xi Jinping already punished many a government official and a businessman who let it hang too wide. Now it's the turn of the film industry. Xi's government stipulated that from now on only 70 percent of the budget for a film can go to the actors' gage.

If one of China's greatest celebrities is disgraced, then the Communist Party shows that they have no compassion for anyone- even if you are so rich and loved.