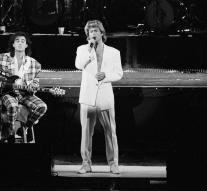 - George Michael and his former schoolmate Andrew Ridgeley were the first Western pop artists that may occur after the chaos of the Cultural Revolution in China. Around 15,000 spectators watched the action in April 1985 Wham! Beijing, closely watched by many nervous policemen.

'I had never seen so many police,' said Mao Danqing, now a famous writer in China, who attended the legendary concert. No one dared to move or make noise.

China had Western music and film in the eighties but sparsely increasing. But after the concert everyone knew the songs of Wham !, even those who later started making very different music, said Kaiser Kuo, frontman of the eighties popular Chinese metal band Tang Dynasty. 'That action marked the beginning that China opened up (for Western music),' said another user on Chinese social media. 'He (George Michael) changed China.'