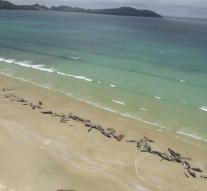 wellington - 145 whales have been washed ashore in New Zealand. Some of the pilot whales were already dead before they were discovered on the secluded beach of the southern Stewart Island. Because of the condition of the other animals it was decided to euthanize the rest, reports the New Zealand Herald.

Whales are often washed in the region. In April, 38 pilot whales stranded on the South Island near the town of Haast. A month before, some 150 short-finned pilot whales spun in Hamelin Bay south of Australian Perth.