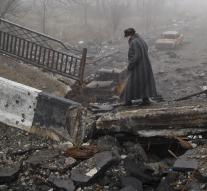 - Staff from the World Food Programme ( WFP) of the UN for the first time in months to deliver food in parts of eastern Ukraine where the rebels are in charge. WFP reported Tuesday that in the past five days two trucks with food for nearly 16,000 people have arrived in the Donetsk region.

" This food helps the people who have left their homes by the conflict or lost their jobs ", said Giancarlo Stopponi , head of the WFP in Ukraine.

There are more shipments on schedule. In total, some 20000 people to be assisted, says the WFP. The people of eastern Ukraine who qualify for humanitarian aid have already been three months since.

Rebels demanded that UN agencies left the region. WFP is providing food to remain in areas controlled by the government.