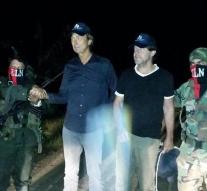 cucuta - 'We have escaped death.' That's what the released journalist Derk Bolt talks to the Telegraph. The television makers Bolt and Eugenio Follender are fond of their release, but their abduction was a pilot trial. 'We had to make terrible voyages through the jungle with the rebellious call.'

Bolt tells his story by car from the caravan that takes them back to Cucuta. There they hope to arrive in a few hours. 'The relief is currently very high. We are glad that we are in freedom and are very content with all the effort that has been made. Only if we are questioned by the police for hours yet, that euphoria will disappear a bit. '

At the time Bolt and camera man Follender were arrested last week Friday, the makers of Spoorloos tried to explain what purpose they were in the area. Bolt: 'But these people are driven by ideology. Then they will see your camera and microphone and think you're from the CIA. '

When they then received the rebel group commander, they understood that it was wrong. 'We had to walk out of a bridge over them. 'You're not afraid,' said the commander. 'We do not kill people'. 'Then, when the army helicopters came near, looking for the pair, started a pilot-long day-long tour of the jungle.

Bolt: 'We literally docked the jungle, as if we were diving into an empty swimming pool. It was a roller coaster. And I thought, 'I'll never survive'. Those querillas captured a way through the vegetation, and we were pulled backwards. But they run like mountain cats and well-trained commands. We walked like bromsnor. That was not enough. '

Once it was rested, it took a short, few hours. 'And suddenly the door opened again and it was:' Come on, Now! '. We have escaped death. Once upon a time I fell almost on a branch that would have gone through me. And my shoes are suitable for the disco, not for such an adventure. '

Follender says they were relieved as soon as they saw on television that attention was paid to their kidnapping. 'If you walk around in the jungle you have no idea whether you are being hostage. There are of course plenty that have been spent there for years. Emotionally, it was a jo-jo effect, 'says Follender.

'I have a lot of pain in my rib cage,' says Bolt. 'Fall on my back three times. And of course we are under the scratches. '

Follender is glad that the adventure has ended. 'I am glad that my family has been informed that it is going well. That is the most important. 'When the two return to the Netherlands, Bolt is still unclear. 'I hope Monday or Tuesday. My son is going on holiday quickly and I would like to see that for a while. '