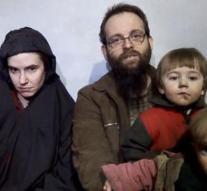 islamabad - The Pakistani armed forces have blessed a Western family to have rescued from the hands of 'terrorists'. According to a statement, a Canadian, his American wife and three children reported the Pakistani newspaper Dawn.

According to the army in 2012, the family became 'terrorists from Afghanistan'. 'The army does not mention the names of the rescued foreigners, but according to the newspaper it is believed that Joshua Boyle, Caitlan Coleman and their children.

They disappeared in 2012 during a trip through Afghanistan. Coleman was pregnant at that moment. The Pakistani army said it had come into action after information was provided by the Americans. They had discovered that the hostages had been brought to Pakistan.