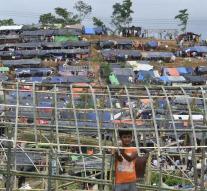 new york - Great Britain, France and Australia have put pressure on Myanmar's leader, Aung San Suu Kyi, to put an end to the military violence against the Rohingya.

The oppressed Rohingya Muslims have been killed a lot, at present, more than 400,000 people have gone to neighboring Bangladesh to escape ethnic cleansing, as the United Nations calls it.

Internationally, Suu Kyi has already received a lot of criticism about the violence. The state woman is speaking to the nation on Tuesday. France has already said it expects a powerful response from Suu Kyi to the violence.

British Foreign Minister Boris Johnson: 'Murder and violence must stop. We not only look at the soldiers, but also to Suu Kyi. It is very important that they and the government make it clear that this must stop. '