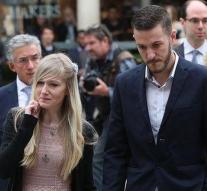 london - The British judge decides Wednesday about the place and manner in which the deathly baby Charlie Gard may die. The almost one year old boy suffers from a rare genetic disease, which is among other things funest for muscles and brains.

The parents of Charlie have in vain a legal battle to have their child undergo an experimental treatment in the United States. On Monday they gave that battle. Chris Gard and Connie Yates want to take Charlie home to make him die there, but according to their lawyer, the hospital threw up obstacles. The hospital indicated that the child should be breathed in such a way that this can only be done in the hospital.

Judge Nicholas Francis announced that he will take a final decision on Wednesday, 'unless there is anything completely new'. The seat at the High Court in London starts at 14.00 local time (15.00 Dutch time).