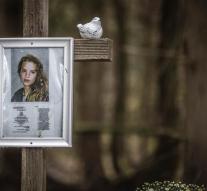 - The challenge chamber of the court in Den Bosch decision Wednesday on the challenge by the relatives of Nicole van den Hurk. Friday asking new judges in the case of the rape and murder of the fifteen year-old girl in 1995.

It put them above the stepmother and stepsister did not fully speak, unlike relatives. When Friday's half-brother was not a third time to speak and the judges in his eyes responded disdainfully, the family decided to challenge.

The half brother wanted to respond to hurtful suggestions by lawyers of the victims of the sex life of the girl.