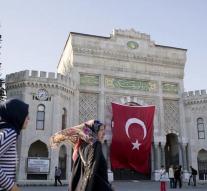 - Again thousands of Turkish officials have been suspended. An estimated 6,500 officials from the Ministry of Education to sit at home until further notice.

Since the failed coup on Friday, tens of thousands of public servants have been dismissed or suspended. Soldiers, policemen and judges were the first professions that were addressed. This occurred at the weekend following the coup attempt. Officials in the education sector Tuesday was preceded by 12. 500 colleagues. Also were told 21. 000 teachers they attend do not have to stand in front of the class.