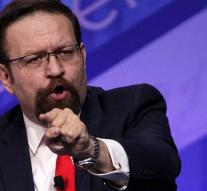 washington - After Steve Bannon leaves another ultra-right advisor to the US president Donald Trump. Sebastian Gorka told to US media that he resigned, but according to anonymous government officials, he was expelled by the new chief of staff Donald Trump, John Kelly.

Like the Bannon, Gorka emerges from Breitbart's right-hand site. He is controversial. For example, he would have ties with anti-Semitic organizations in Hungary, where his parents came from. His view on Islam is also controversial.

Gorka himself did not want to say why he left, but referred to the Conservative Site The Federalist, who published parts of his resignation letter. In that, Gorka writes that 'the forces that make America Great Again do not support emerging in the White House' and that he can best support the president outside the White House.