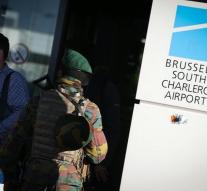 - Air traffic in Belgium Wednesday again confronted with problems that can not continue several flights. This time it is a lack of air traffic controllers. Charleroi Airport is the morning quarter past seven and half past eleven closed. That means a line through 23 departing and arriving flights.

Flights are diverted as much as possible to other airports, such as Maastricht and Lille in northern France. Air traffic controller Belgocontrol also has trouble getting around the occupation in the control tower at the smaller airport of Liège. A total of six hours Wednesday in Liege can no planes departing or arriving.

Belgocontrol is facing a large number of patients, said a spokesman. Air traffic controllers can not simply from one be transferred to another airport to assist, requiring a specific license.