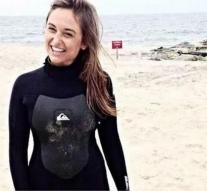 - For the second time in one week in New York committed a gruesome murder of a jogster. Sunday, naked and lifeless body of 27-year-old Google manager Vanessa Marcotte was found in the bushes, hours after she was reported missing by her family. The woman appeared to have been raped and had several burns all over her body.

Marcotte was jogging when she was attacked. The same happened Karina Vetrano early last week in Queens. Many Americans are in shock. Although the cause of death of Marcotte yet officially been brought out by the authorities, it is clear that this is a brutal sex murder. 'This woman was attacked as she was jogging on a rural road. It is not yet clear whether this was a random attack, 'said local prosecutor Joseph Early Jr. Who warns the people of Massachusetts. 'Maybe they should only go out in the company of others. '

Marcotte, who was seen as a rising star at the Internet powerhouse Google, will be missed by her employer. 'Vanessa Marcotte was a particularly valued and loved member of our team. She worked for over a year at our office in New York and was known for her perpetual smile, volunteer work and love of sports. We are shocked and deeply saddened. Our thoughts are with her family and friends, 'let Google know in a comment.