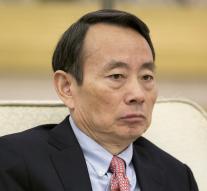 - Jiang Jiemin, the former president of the China National Petroleum Corporation has been convicted of corruption in Beijing to a prison term of 16 years. That the Chinese state television announced Monday.

The National Petroleum Corporation is the enormous Chinese state trading and production of gas and oil. Jiang was a close friend and worked with Zhou Yongkang, member of the Chinese Politburo, the main man who disappeared so far in the fight against corruption behind bars.