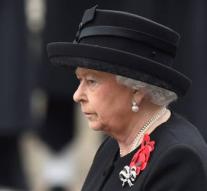 - Britain's Queen Elizabeth has for the second time in a short time lost a friend. Elizabeth Longman died Thursday at the age of 92 after a brief illness, British media report.

Elizabeth grew up with her namesake and learned along with her dancing in a London dance studio. Lady Elizabeth Longman in 1947 was bridesmaid at the wedding of the then Princess Elizabeth and Prince Philip.

Last month, Elizabeth lost her cousin and good friend Margaret Rhodes. Even Margaret, who was buried Monday, was a bridesmaid at the wedding of Elizabeth and Philip. 'Her Majesty is deeply saddened,' said an insider from the Daily Mail. 'It's horrible in a short time to lose two good friends. '

Of the eight bridesmaids Elizabeth there are now two more alive, Lady Pamela Hick and Princess Alexandra. The nonagenarian Queen Elizabeth and the 95-year-old Prince Philip celebrate their platinum wedding next year, they were married on November 20, seventy years.