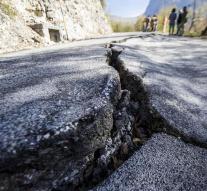 rome - The heart of Italy's Sunday again rocked by an earthquake. The quake, according to the European-Mediterranean Seismological Centre magnitude 6.5. The epicenter was southeast of the city of Perugia and was felt in many parts of Italy.

The quake occurred under the EMSC for 07. 40 hours, at a depth of 10 kilometers. There are no reports of damage or casualties.

The area is frequently hit by earthquakes. In August came to an earthquake near the town of Amatrice nearly three hundred people dead. Last week there were several earthquakes, with some injuries occurred and has caused much damage again.