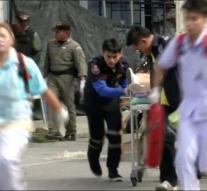 - The south of Thailand is Friday again rocked by a series of bombings. The explosives exploded on the island of Phuket, Surat Thani Province and in the city of Hua Hin, where Thursday even though a dead fell in an attack.

Thai authorities and media speak of multiple victims. According to the Bangkok Post certainly came when explosives went off a person killed in police stations in Surat Thani. At least three bystanders were injured.

Hua Hin became Friday according to witnesses at least three people injured. That happened when explosives went off in a bell tower. The city was Thursday also been rocked by two explosions. When a Thai saleswoman was killed and 21 people were certainly injured, including a Dutch woman.


On the popular tourist island of Phuket were among Friday, according to the police two small bombs. There would only be a taxi driver injured.