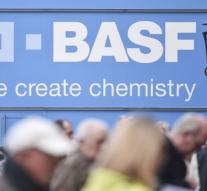 - When drilling activities in the field of chemical company BASF in Ludwigshafen, Germany Wednesday employees were startled by an explosion. An explosive, probably from World War II, went off. No one was injured. The bomb squad will examine the site Thursday.

It is not the first time that a bomb from World War II is found at BASF. In August, it has also been an explosive device found. Which was later controlled detonated.