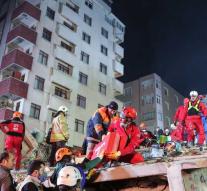 istanbul - The death toll due to the collapse of a flat in Istanbul has risen to eleven. The authorities announced on Thursday evening that another body was recovered, reports Turkish media.

Rescue workers previously took a 5-year-old girl alive from the rubble. She had spent nearly eighteen hours there. The governor of Istanbul said that aid workers had already contacted the buried girl before the rescue. They tried to reassure her. The child has since been transferred to the hospital.

The building in the suburb Kartal on the Asian side of the Turkish metropolis collapsed on Wednesday afternoon. It is still unclear how that could happen.