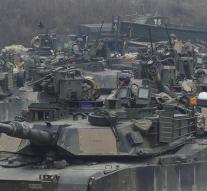 stockholm - Russian arms manufacturers are doing good business. They knew in 2014 to significantly increase their sales, unlike most other major defense companies in the world. According to figures from the International Peace Research in Stockholm (SIPRI).

According to the researchers was the Russian arms sales in 2014 by over 48 percent. The number of Russian arms manufacturers in the global top hundred rose from nine to eleven. Russia was thus a market share of more than 10 percent of the global arms trade, according to SIPRI.The total value of international trade measured in the hundred largest arms producers fell last year by 1.5 percent to $ 401 billion (365 billion euros). It is the fourth consecutive year that the arms sales declines. Especially American and Western European manufacturers sold less weaponry. Germany and Switzerland while but were exceptions.American companies dominate the list of the hundred largest arms-producing companies with 38 companies, seven of which are in the top ten. Lockheed Martin, manufacturer of among others the Joint Strike Fighter, is in first place with sales in 2014 of 37.5 billion dollars. After that come Boeing and BAE Systems. The European Airbus takes the seventh spot. The greatest weapon of Germany's Rheinmetall group, which included the Leopard tank and it builds armored vehicle Puma.The figures from SIPRI, China is not included because data are often lacking.
NEW