Home / World / Weapons down on the Philippines 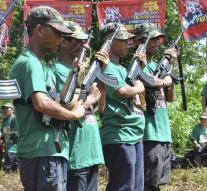 - The government and communist rebels in the Philippines have agreed a ceasefire ahead of peace talks in Norway. The new cease-fire on the part of the Government starts on Sunday and lasts,, as long as necessary to bring peace to the country, '' said the adviser to President Rodrigo Duterte Saturday.

The rebels of the Communist Party of the Philippines (CPP) announced a truce. Which also must begin on Sunday until the end of the talks in Oslo on 27 August.

Duterte on July 25 had already declared a truce, but ended six days later after rebels had slain a government soldier. With the new fire break, the government wants to underline its efforts to promote peace, said adviser Jesus Dureza.


On Friday the government had captured two leaders of the CCP released on probation. They may temporarily free travel so that they can take part in the peace talks in Oslo.

The rebels have been fighting for decades against the government in the Southeast Asian country. In the bloody conflict since the late sixties, more than 40 000 people lost their lives.