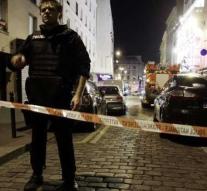 rotterdam - The three men who were arrested on Monday because they would have delivered weapons to two French terror suspects are stuck for two weeks longer. The Public Prosecution Service reports this on Twitter. Their DNA was found on firearms in a hiding place of Islamic State in Argenteuil, a suburb of Paris.

The suspects are a Groninger (26), a 53-year-old man who is stuck in Zaanstad and a thirty-year-old without a permanent residence.

Two days after the attacks in Brussels on 24 March 2016, the police discovered an IS apartment in Argenteuil. In the hiding place were five Kalashnikovs, small arms, 30 kilos of explosives, detonators, false passports, mobile phones and jihadist writings. The apartment was rented by the French jihadist Réda Kriket.

A second suspect, the Frenchman Anis B., was arrested in Rotterdam in 2016. There was also a lot of ammunition in his apartment.