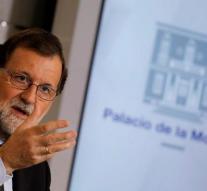 Rajoy told a press conference on Friday that he wants partners in the European Union to 'analyze current cooperation mechanisms, and look at ways to strengthen and improve them.' '

With the four countries, Rajoy wants to make a start. He hopes to discuss how European cooperation in the fight against terrorism can be improved because, given the statements, Rajoy is not entirely happy with the current way of working.