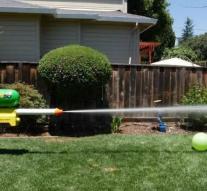 - A former NASA space engineer has made a very large water gun. The Super Soaker of Mark Rober can shoot water at a speed of 438 kilometers per hour. Quick enough to shoot a watermelon.

According to Mark, the water gun is no children's toys. 'For that, the thing is far too strong. 'Even soda cans can be sprayed through it.

Mark made the water gun especially for the wages and an honorable mention in the Guinness World Records book. The latter has been successful.