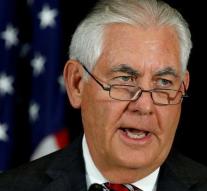 washington - The United States is considering closing their embassy in the Cuban capital of Havana in response to possible attacks by sound waves on diplomatic staff. 'We are making a possible conclusion,' said Foreign Minister Rex Tillerson in an interview with CBS on Sunday.

The Ministry of Foreign Affairs reported in August that mysterious 'incidents' caused some Americans to physically complain at the embassy in Cuba. In the media, there was a message about 'acoustic attacks. '

Several diplomats or their family members had hearing problems, dizziness, temporary memory loss or other symptoms. Five Canadians in Cuba had similar complaints.

Tillerson reports of a 'very serious issue. 'Cuba, the US and Canada have researched the sound waves, but so far, it is still unknown what has happened.