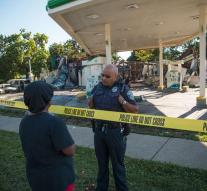 - The 23-year-old man who sat by the police was shot dead in the US Milwaukee, with major riots resulted, had at that time a gun in his hand. This appears according to Mayor Tom Barrett from video from a bodycam, a camera carrying a policeman on his body.

The dead man's name Sylville Smith, police confirmed after family members had spoken with local media. According to the police chief of the city in Wisconsin is the man in the past repeatedly been in trouble with the police. The pistol he was holding, was stolen.

After the fatal incident outraged citizens took to the streets and accused the police of racism. But according to sources of the Milwaukee Journal Sentinel was not only the victim, but also the 24-year-old policeman who shot him black. The confrontation began with a check. Making it went wrong, is not yet clear. According to the mayor Smith turned the weapon in his hand towards the officer and he reacted not to drop it on command.


In shops, cars and a petrol station was set on fire Saturday. Sunday morning reported volunteers to clean up the mess. Meanwhile Milwaukee braces for the next night. The governor of Wisconsin has announced a precautionary state of emergency in the city and the National Guard has 125 men stand ready to assist the police, if necessary, ABC News reported. So far seventeen people were arrested for involvement in the riots on Saturday.