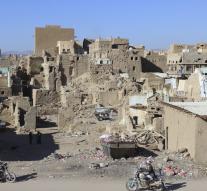 sanaa - Militants of the fundamentalist terrorist organization al- Qaeda have taken two major cities in southern Yemen. It involves Zinjibar and Year, located near the port city of Aden. That, residents and local fighters said Wednesday.

The militants would have carried out a surprise attack and then have clashed with local forces. The conquest was then broadcast through the speakers. Zinjibar and Year fell in 2011 already in the hands of al-Qaeda fighters. The Yemeni army drove out the militants a year later.

In Yemen Shi'ite Houthi rebels fighting a bloody battle with a coalition of Arab states led by Saudi Arabia. The Houthis, who are supported by combatants loyal to former president Saleh, occupy large parts of the country.