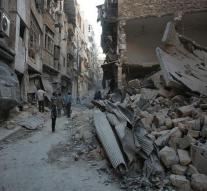 "That has reported Observatory for Human Rights. There are dead and wounded. It would also, that Russian aircraft have carried out the attack."