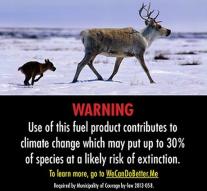 vancouver - The Canadian city of Vancouver will from next year, placing stickers on fuel that warn of climate change.

Stickers, an initiative of the non-profit organization Our Horizons, suggest motorists on the negative effects of fossil fuels on the environment and human health.

The warnings are reminiscent of those on cigarette packs. " The use of this band fabric contributes to smog that causes asthma and other respiratory problems in children, " is one of the texts. In addition, there is a picture of a child. The other texts refer to climate change, causing species extinction, and ocean acidification, which is disastrous for marine life.

" Approximately fifty percent of the greenhouse gas emissions caused by vehicles in the city, " said the mayor of North Vancouver earlier this year after the law was passed. " By reminding people that there is a link between the use of fossil fuels and climate change, and to give tips on alternative transport and economical fuel consumption, we can reduce the impact on the environment. "

According Our Horizons founder Robert Shirkey is important for people to change their behavior. " [ The labels ] make the reader an active participant rather than a passive bystander, " he told the Canadian newspaper Globe and Mail. " It is crucial to bring about change. " According to him, it is not supposed to talk to motorists guilt. He wants motorists will think more consciously about their use of fossil fuel.