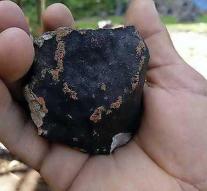 havana - Scientists warn for the radioactive radiation that fragments of a meteorite have hit on Cuba. The numerous fragments came to the province at the beginning of this month...

The experts have since found a hundred parts, but the local population has also enthusiastically collected fragments. They keep the residents as a souvenir. The scientists emphasize to the people that they should not wear the stones of heaven as a jewel around their neck, in view of the radiation.

The pieces of stone may come from the astroid Vesta, which is more than 372 million kilometers away from the earth and is the third largest astroid in our solar system.