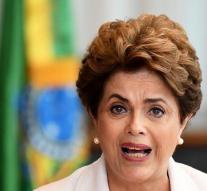 - The suspended president Dilma Rousseff of Brazil is prepared to hold a referendum on whether there should be early elections. This is stated in an open letter that she sent to the people and to the Senate.

They have set a condition: if the referendum comes, they can not be marketed in late August. In the four-page letter she also indicates his innocence, but to have made mistakes. Those errors, however, are not so great that an impeachment procedure is necessary. Rousseff warns in the letter even for a coup, if they have to leave.

The president's long home, she was suspended in May because she was accused of fraud involving public funds.


Last week the Brazilian Senate voted yet with impeachment. After almost seventeen-hour session were 59 politicians for impeachment proceedings. If Rousseff is put permanently out of her office, interim president Michel Temer will spend the rest of her term head of state.