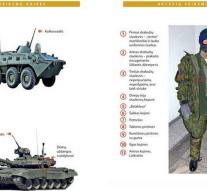 - Lithuania has released a new version of a booklet with tips civil protection in the event of a Russian invasion. It includes tips for surviving in the wild and locating Russian tanks, guns and mines. This reports the BBC Friday.

In addition to the booklet, the Lithuanian government has also opened a special hotline where citizens can call to go to a suspected spy.

The tone of the book is a lot more serious than the previous two editions, which appeared since Russia's annexation of the Ukrainian peninsula of Crimea in 2014. Baltic announced A year later, the reintroduction of conscription to.

Tens of thousands of copies of the 75 page booklet have been distributed in the country that once belonged to the Soviet Union and borders the Russian exclave of Kaliningrad. In 2004, Lithuania became a member of NATO.

From January to March, four Dutch F-16s will patrol the airspace of Lithuania. In March, adding still two hundred Dutch soldiers with them. All this as part of a NATO mission that is intended to curb the military threat from Russia.