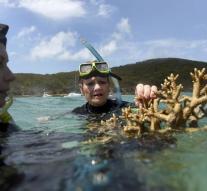 sydney - In a large part of the Great Barrier Reef coral appears to have died in the last nine months. It is an area of ​​700 square kilometers, which has been destroyed according to Australian scientists two-thirds of the reef.

Never before has such a blow to the protected reef, which occupies a prominent place on the World Heritage List. The researchers are clear about the cause: the waters of the Coral Sea is too warm. 'The water boils as it were, the coral that fades and dies', it describes one of the scientists the situation.

The destructive phenomenon mainly occurs in the northern part of the reef. To the south is the sea water cooler. Australia announced converted to want to allocate about 700 million euros in order to avoid further deterioration of the reef.

The Great Barrier Reef is the largest coral reef in the world, located on the east coast of Australia. Nearly 3,000 reefs stretch out over a length of nearly 2,500 kilometers, an area of ​​334 000 square kilometers. The reef is considered the biggest tourist attraction in Australia.