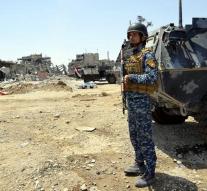 erbil - US-trained Iraqi troops committed war crimes in the fighting around the city of Mosul. In the final stage of the battle against Islamic State (IS), Iraqi soldiers have executed dozens of men, according to Human Rights Watch Human Rights Watch Thursday.

The organization called on the US government to withdraw all support for the 16th Division of the Iraqi Army awaiting and investigating war crimes. Two international observers would have evidence. Iraq has promised to investigate the allegations.

Iraqi troops and warriors have been fighting for months for Mosul, the second city of Iraq where the terrorist organization called the caliphate in 2014. Especially the battle for the old city was violent. On July 10, Prime Minister Haider Al-Abadi declared that Mosul had been reinstated. Shortly afterwards, videos of Iraqi soldiers struck unarmed men.