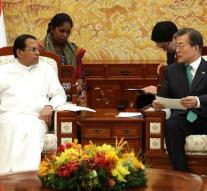 colombo - Sri Lankan residents will soon be able to apply for the position of executioner. The country has not carried out executions for decades, but that seems to be changing now. President Maithripala Sirisena is considering revitalizing the execution of the death penalty.

The Sri Lankan prison system does not want to wait for the change of course. 'Since the president has indicated that he wants the death penalty to be carried out, we must ensure that we are ready for it', explains a spokesman. 'That is why we are going to hire two executioners. '

Convicted criminals did not have to worry about the noose in recent years. The last execution in the country took place in 1976. All death sentences have since been converted into life imprisonment. Still, hundreds of people are formally still on the death row, including for murder and drug trafficking.

Sirisena, however, is considering putting an end to the conversion of death sentences. He says he wants to sign death sentences with convicted drug smugglers who continue their illegal trade in prison. The government hopes to reduce drug crime with such steps.