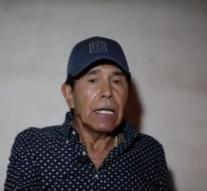 - The freed in 2013. Mexican drug lord Rafael Caro Quintero says nothing to be dealing with the murder of an employee of the US anti-drug unit DEA.

That said Caro Quintero, who has been detained in Mexico 28 years before that, from an undisclosed location in front of Mexican media.

,, I was in the wrong place, 'said Caro Quintero who admitted that he was present at the murder.

The Americans take the drug lord responsible for the abduction, torture and death of the DEA employee. The US has since its release a reward of five million dollars (over 3.7 million) offered for the tip that leads to his arrest.

Caro Quintero arrived in August 2013 a free man after a judge let him go because of a procedural error. He dived straight down. The Mexican was early 80's co-founder of the Guadalajara cartel.