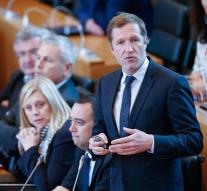 charleroi - Walloon Prime Minister Paul Magnette steps up. The socialist takes up the mayor of Charleroi. Magnette became world famous in October when he refused to agree to the CETA Free Trade Agreement between the EU and Canada. The drawing ceremony with Canadian Prime Minister Justin Trudeau had to be postponed until Wallonia received certain guarantees.

Magnette made his decision known in Charleroi on Monday morning. 'Mid-August I will take up my job here again. 'Since 2012, Magnette is official mayor, but because of his premiership he is perceived by a fellow party.

There has already been talk about Magnette's decision in the Belgian media. Since June, when the Walloon Christian Democrats (CDH) declared their confidence in the Party Socialist (PS), ruling is no longer possible. Reason was a series of scandals about payouts for collaborators who raise PS politicians without much to do.