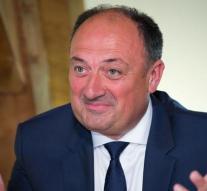 name - The Walloon Parliament approved a new government on Friday. Liberal Willy Borsus becomes prime minister of the first Walloon government without socialists in nearly thirty years. He follows Paul Magnette, who made famous France in France and himself worldwide when he refused to agree to the CETA Free Trade Agreement between the EU and Canada.

The new squad immediately resigned after the parliament sent the Magnette government home. Wallonia is a so-called legislature government. This means that the government remains in a political crisis until a different majority has been formed without the issue of interim elections. That was the case when the Christian Democrats (CDH) and Liberals (MR) reached an agreement.

In June, CDH party chairman Benoît Lutgen made a bomb under the Walloon government by joining the coalition with the Party Socialist (PS). Reason was a series of scandals that revealed friendship politics and a grain culture at PS.

Borsus was previously Federal Minister of Agriculture. Magnette returns as Mayor of Charleroi.