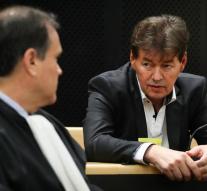 - The Walloon former politician Bernard WESPHAEL is not guilty of manslaughter of his wife Véronique Pirotton and goes free. That took the conclusion of an international jury after a much-discussed case in the Walloon place Mons (Mons) three weeks.

The 56-year-old WESPHAEL, co-founder of the French green party Ecolo, could accommodate you with a guilty verdict to thirty years in prison. According to him, his wife committed suicide.

Pirotton was on October 31, 2013 under suspicious circumstances found dead in a hotel room in Ostend where the couple was staying. The Prosecution considers that there was manslaughter.

According to the former parliamentarian had the couple arguing and followed a small scuffle. He then went to sleep in his own words, and found his wife later died in the bathroom. WESPHAEL reiterated Thursday shouting that he is innocent. 'The jury, I would say that I'm a man with a lot of mistakes. But I'm not violent. ''