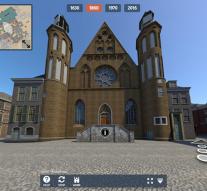 - The year is 1630. You are in the Binnenhof in The Hague. For you see, the Knights, lifelike. Next week is possible. Then namely presented a 3D app Parliament Buildings. A journey through history.

The tablet app shows Parliament Buildings in 1630, 1860, 1970 and 2016. '' In every period you looking for background information, political facts, architectural facts and anecdotes, '' said the institute ProDemos that the app has been developed.

The app will be inaugurated on Friday, December 9th by Stef Blok, Minister of Housing and National. This is done in the basement of the Knights, at the Courtyard.