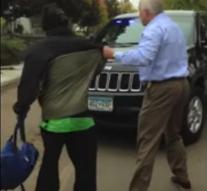 - The arrest of an African-American man in Minneapolis led to angry reactions on social media. The 34-year-old Larnie B. Thomas walked unsuspecting- and unarmed- on the street when he was stopped by a policeman.

Video footage of the arrest, which took place on October 12, shows how Thomas in broad daylight to walk by the Edina neighborhood in Minneapolis. He runs into the shoulder of a busy road- the sidewalk is closed- if he is stopped by a cop. The policeman tries to grasp Thomas, which the American is fierce. 'You can not just do that. This is ridiculous, 'he says.

Thomas tries to explain that he was forced to walk on the roadside because the sidewalk was not passable. A passing motorist filmed the arrest and placed the images on YouTube. Meanwhile, the video has been viewed more than 300 000 times and responded hundreds of people with great indignation.

The authorities via a message on Facebook attempted to defend the arrest of Thomas. The American would have the agent 'challenged' and he would have smelled of alcohol.