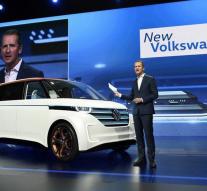 - Germans who return their old diesel in the car to buy a new car from Volkswagen, can count on a hefty fee. The scandal-plagued automaker has boosted the trade premiums of cars to 10,000.

It is a new attempt to meet the public fuss about diesel cars. By encouraging motorists to buy a new car, polluting diesels can be picked up faster. Last week, Volkswagen, BMW and Daimler promised to provide more than 5 million diesel cars with a new software update.

Volkswagen announced in September 2015 that it had been falsely played with emission tests using software. Later it also appeared that diesels from other brands have higher emissions than allowed.

BMW offers German car owners who have delivered their old diesel for a period of up to 2000 euros on the purchase of a new electric variant. Daimler has not yet announced any new terms of trade. It is also unclear whether comparable offers are available in the Netherlands.