Home / Tech / VVN: Smartphone needs to turn off the car 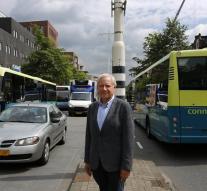 amersfoort - Calling and driving behind the steering wheel should be punished as heavy as driving with a sip. Only by using the smartphone in the car as a heavy traffic offense will motorists adjust their driving behavior and reduce the number of traffic casualties.

That will put Safe Traffic Nederland (VVN) into a letter of fire, which will be found by Commissioner Bloem (Security and Justice) today in his mailbox.

The governor announced in The Telegraph that reckless driving behavior is being tackled harder. 'However, the use of the smartphone is not called as an offense that needs to be slowed down,' says VVN director Felix Cohen. 'But if you do not tackle the main cause of the increase in the number of deaths and serious woundedness, you can stretch the horse behind the car. '

In the letter, Cohen writes that it is even technically possible to make smartphone usage impossible while driving. 'I am in favor of this distortion by the smartphone by 100%. We want to reduce the risk of accidents. It is high time to seriously work out bouncing out of the steering wheel. '

For a long time, it was good to reduce traffic casualties. Vielen killed 1166 in 2000, and in 2014 there were 570. 'But in recent years we see the numbers rising again,' said Cohen, 'until 629 last year. Not by accident parallel to the increasing popularity of the smartphone. And I do not even agree with the number of seriously injured, who has also risen with many hundreds to over 21,000. '

'Of course, we are delighted that Block prepares a law driving reckless driving more quickly. But it must be clearly stated that in addition to driving under influence and an absurd high speed, the use of the smartphone is also punishable. The law must help prevent prevention. That is why we are urging the minister to take action now. '