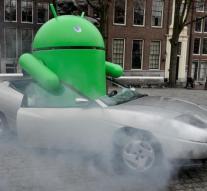 - The vast majority of Android devices has at least one serious security breach . According to new research from the University of Cambridge .

The researchers have analyzed over the last four years of data from more than 20.000 Android devices. They concluded that nearly nine in ten ( 87 percent ) of the devices are vulnerable. Nexus devices, in which a bare version of Android running, were the best test. LG follows in the second place.

The main reason is that manufacturers do not always spread equally loyal updates to seal leaks. Another factor that several older versions of Android are still widely used because many people are operating their Android smartphone or tablet is not readily or not (be able to) update.

The research was funded in part by Google , the developer of Android. The mobile operating system has been rocked in recent years by several security holes, such as Stage Fright. Partly for this reason, some manufacturers decided to meet monthly with security updates.