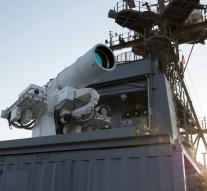 The US news channel was granted exclusive access to the weapons test aboard the USS Ponce Naval Ship. The drone who served as a target was heated by the invisible and silent ray that collapsed into the sea.

Lieutenant Cale Hughes, who led the new weapon, is in the mood with the LaWS system. 'We do not have to worry about the wind, distance or anything,' said the officer. 'We can attack targets with the light speed. '

The USS Ponce commander mentioned another advantage of the costly weapon system of about 40 million dollars (almost 35 million euros): the relatively low price. The LaWS does not use millions of costly missiles or other ammunition, but only needs electricity. The usage costs are about 'one dollar per shot,' said commander Christopher Wells.