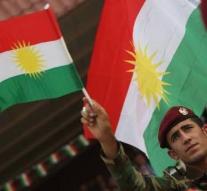 washington - The United States wants the Iraqi Kurds to abstain from the referendum on independence that the Kurdish semi-autonomous region has issued in Iraq. The US is 'strongly opposed' to the scheduled Monday referendum, let the US Department of Foreign Affairs know.

The US urges the Kurdish leaders to continue to negotiate with the authorities in Baghdad. Iraqi Prime Minister Haider Al-Abadi earlier this week went to the Iraqi Supreme Court to declare 'the secession of any region or province of Iraq' unconstitutional.

However, the court has no means to enforce the execution of its decisions. Kurdistan has its own police force and government led by Massoud Barzani.

Previously, the US, Turkey and other Western countries have called for cancellation of parliamentary consultation. But it is the first time that the Americans occupy such a powerful language.

The Iraqi Kurds, with US support, play a leading role in the struggle against Islamic state. However, the Kurdish involvement also interfaces between Turkey and the US.

Turkey in particular fears that a yes voice will wake up the separatism of its own Kurdish minority, but Iran has also called on the Iraqi Kurds. 'Any attack on Iraqi unity will lead to a revision and major change of current cooperation between Iran and the Iraqi Kurdistan region,' warned Ali Shamkani of the Iranian Supreme National Security Council.