Home / World / VS: Qatar needs to be with critics at the table 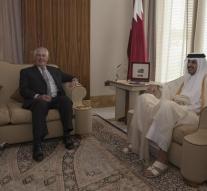 washington - The United States wants the countries involved in the Qatar crisis to sit together. Direct talks between Qatar and the Arab countries that have isolated the Gulf State would be 'an important next step' in the resolution of the conflict, according to Minister Rex Tillerson (Foreign Affairs).

Saudi Arabia, UAE, Egypt and Bahrain broke the economic and diplomatic ties with Qatar a month ago. They blame the Gulf State for support to extremists and close ties with Shiite Iran. Tillerson hopes, according to a spokesman for his department, that the parties involved are willing to talk to each other without any intermediary.

The quarrel is the US a thorn in the eye. Washington has an important military base in Qatar, but is also an ally of other countries involved. Tillerson traveled to the region this month to mediate in the conflict. He then signed an anti-terrorist agreement with Qatar, but the rivals of the Gulf State found that step insufficient to put an end to the crisis.