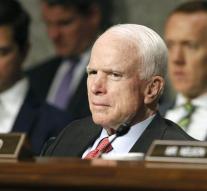 washington - US Senator John McCain has successfully removed a blood clot of about five centimeters above his left eye. Through the operation, he would be absent from the vote on the new health law that Obamacare has to replace. This vote has therefore been postponed.

Mitch McConnell, the Republican Senate leader, needs 50 yes votes to get the new law through. Currently, the Republicans have a nipte majority in the Senate with 52 seats versus 48 Democrats.

Two Republican senators already voted against voting, what McCain is going to vote is not known.

In June, the vote on a new health act was postponed, the Republicans did that because they did not get a majority for the proposal on the table. After that, the proposal was updated, hoping that there would be a majority.