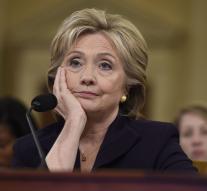 - US presidential candidate Hillary Clinton is Saturday (local time) arrive at a debate of the Democrats under fire because of its support for the invasion of Iraq. According to her rival Bernie Sanders led the conflict to " the tremendous instability that we see " in the Middle East.

Sanders argued during the debate in Des Moines (Iowa) the " catastrophic invasion of Iraq, " has contributed to the emergence of radical groups like al- Qaeda and Islamic State. The senator from Vermont talked about " one of the biggest blunders in the field of foreign policy in the modern history of the United States ".

Clinton named her vote to oust the regime of dictator Saddam Hussein in 2003 had a previous error. She emphasized that its support should be placed to the invasion of their historical context.

Clinton as senator voted for the proposal to invade Iraq, lies within the Democratic Party is still very sensitive. It played a role in its defeat in 2008, when it failed to win in the primaries of the Democrats. Barack Obama was then allowed to participate on behalf of the party in the presidential election.

The former foreign minister has now been extended again as favorite to win the primaries. Besides Clinton also want Sanders and former governor Martin O'Malley make a bid on behalf of the party to the presidency.