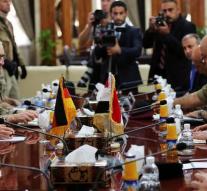 baghdad - German Defense Minister Ursula von der Leyen has Iraq Thursday extended support promised in the fight against Islamic State. ' I can on behalf of Germany only say that we are on your side, because you also fight on our behalf against terror, '' she said during a lightning visit to Baghdad. ' We will continue to help you in the best way. \'

Von der Leyen expressed satisfaction with the results so far. ' IS received painful blows and significantly reduced to the area around Mosul. '' That's according to her has been working proof that the federal government strategy to train indigenous soldiers and equip.

Germany leads since January 2015 peshmergastrijders Kurdistan in northern Iraq as well as militant members of religious minorities as Yezidis and Kakai.